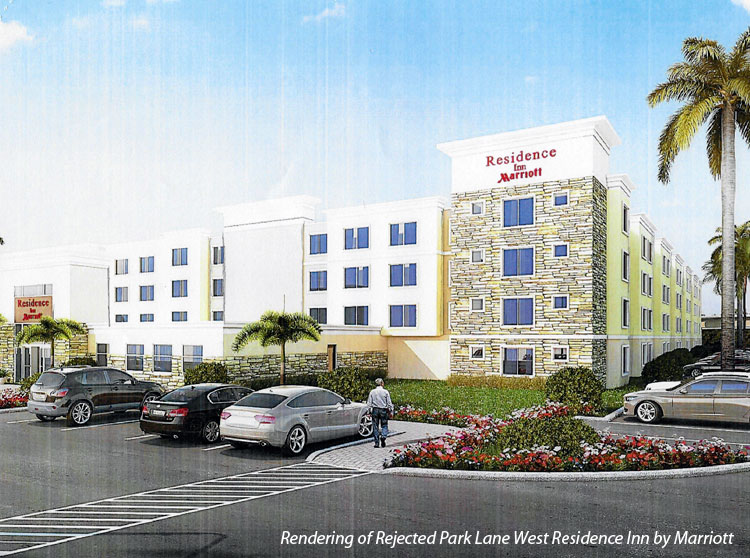 On Wednesday, November 1st the City Commission of Oakland Park rejected a proposed hotel by a vote of 3-2.  The proposal was rejected by the Planning & Zoning Board a few weeks earlier but requested a full city commission review.

The property owner, SPIH of Oakland Park, LLC, proposed to construct a new, 4-story, 124-room hotel on the 2.35 acre parcel located at the southwest corner of Park Lane West (NW 38th St.) and Powerline Road.  The proposed hotel would be branded as “Residence Inn by Marriott”, to be managed by MCR Development. The subject site is in the PRZD, Powerline Road Zoning District.  Hotels are permitted only as a Conditional Use in PRZD.  In addition, new hotels in Oakland Park must comply with the minimum standards for new hotels as set forth in Section 24-63 – Hotels, of the Land Development Code.

Discussion by city commissioners and input from the public lasted four hours.  The majority of public input was negative, with worries about safety, and  the increased traffic flow on Park Lane West/NW 38th Street. 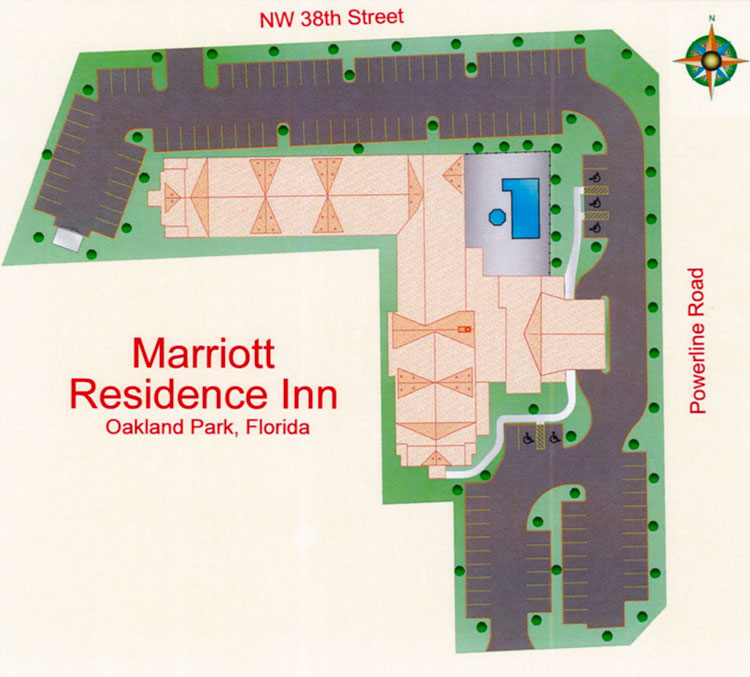 The main ingress/egress to the hotel will be from NW 36th Street, which connects to Powerline Road.  There will not be a driveway connecting to Powerline Road.  The secondary ingress/egress is proposed on NW 38th Street.  A new westbound left turn lane will be constructed on NW 38th Street to direct vehicles into the property without blocking through-traffic movements for vehicles travelling westbound.  Exiting onto NW 38th Street will be signed, striped, and directed as a right turn only. Traffic studies were conducted by the applicant, then reviewed and accepted by the City’s Traffic Engineering consultant (URS/AECOM).  The expected trips are 627 vehicles per day, with 49 at AM peak hour and 51 at PM peak hour.  The study concludes that “Powerline Road, NW 38th Street, and Prospect Road are all operating at acceptable levels of service and are expected to do so after the construction of the proposed Residence Inn.”  The applicant’s consultant has conducted a review of traffic counts and turning movements in 2016 and the results did not change the conclusions of the original study.  In addition, the City and applicant’s traffic consultant has reviewed the proposed changes to Powerline Road Project and has concluded that there will be no impact based on the proposed changes to Powerline Road.

Currently, the eastbound traffic on NW 38th Street has 2 lanes:

The traffic engineers have recommended the following:

The developer was required by city code to hold a Neighborhood Participation Meeting, of which two were held: 4 years ago in November 2013 with 11 attendees, and another in November 2016 with only 6 attendees.  They were required to mail out notices to all addresses within 750 feet of the parcel.  However, that distance covered less than 100 addresses, leaving out the entire Royal Palm single family home neighborhood of about 300 homes and Royal Park Condominiums, a 671-unit complex.  Word-of-mouth quickly spread and resulted in homeowners emailing an calling city commissioners to reject the proposal and high turn out at the city commission meeting for public discussion and comments.

The developer had introduced their attorney (specifically noted as “litigation counsel”) at the beginning of the discourse so there is a chance a lawsuit could be filed against the city.